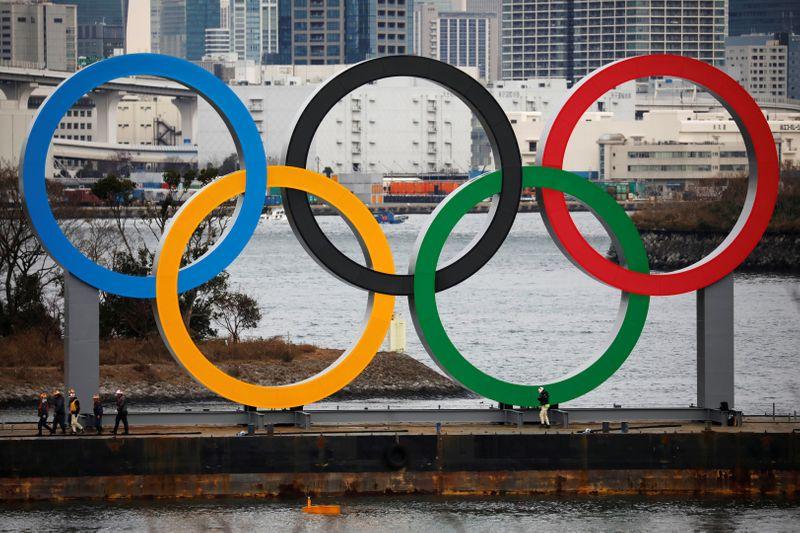 TOKYO (Reuters) – The World Health Organization has told the International Olympic Committee there is no case for cancelling or relocating the Tokyo 2020 Olympics over the coronavirus outbreak, the head of the IOC’s Coordination Commission said on Friday.

FILE PHOTO: Giant Olympic Rings are installed at the waterfront area at Odaiba Marine Park in Tokyo, Japan, ahead of an official inauguration ceremony, six months before the opening of the Tokyo 2020 Summer Olympic Games, January 17, 2020. REUTERS/Issei Kato

The 17-day event is due to start on July 24. Japan said separately on Friday it would step up testing and containment after reporting its first coronavirus death and confirming new cases, including a doctor and a taxi driver.

John Coates said advice the IOC had received “externally” from the WHO was that “there is no case for any contingency plans of cancelling the Games or moving the Games.”

The spreading outbreak, whose epicentre is the Chinese city of Wuhan, has prompted the cancellation of some international sporting events, as well as 2020 Games qualifying competitions for boxing and badminton that were due to take place in China.

Coates said coordination between the Japan organising committee’s virus task force and other national authorities reinforced the IOC’s confidence that the situation was being properly addressed.

That raised expectations that “we’ll be able to ensure that the Games go ahead in a way that’s safe for the athletes and spectators,” Coates told a news conference hosted together with Tokyo 2020 Olympics President Yoshiro Mori.

Toshiro Muto, the CEO of the Tokyo 2020 organising committee, said in early February he was “seriously worried” that the virus might impact momentum towards the Games, but pledged the following day the event would go ahead as planned.

There have been more than 60,000 confirmed coronavirus cases in mainland China and nearly 450 in 24 other countries and territories, including 33 in Japan and another 218 on a cruise ship quarantined at a Japanese port.

Coates said he was impressed with how China had been able to monitor its athletes “since day one”, and that most had been preparing for the Games overseas and would therefore not need to be quarantined on arrival in Japan.