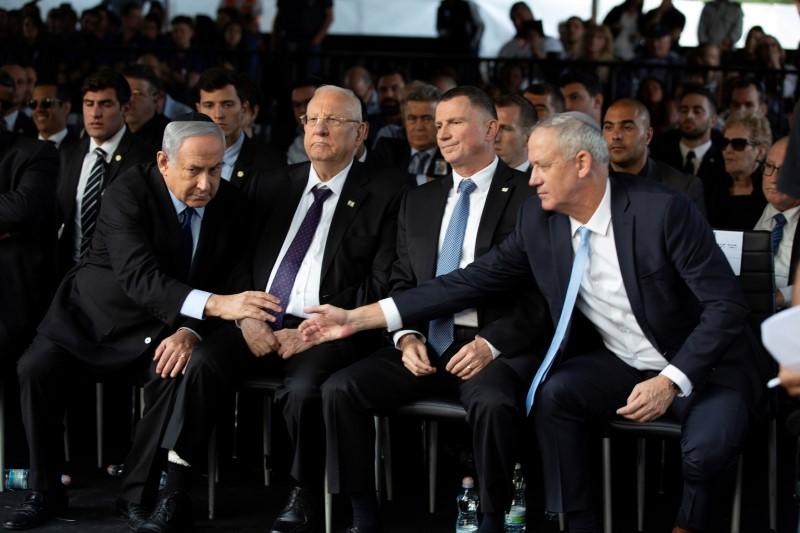 With the support of Netanyahu’s right-wing Likud and allied parties, former general Gantz left many of his own political allies fuming over the smoothing of a path to partnership with a prime minister under criminal indictment.

The surprise twist in 48 hours of political drama plunged Gantz’s Blue and White Party into disarray just 13 months after it came into existence as a coalition of centrist Netanyahu opponents intent on bringing down the 70-year-old right-winger who is Israel’s longest-serving prime minister.

Gantz’s move opened the possibility of a “rotation” deal in which he and Netanyahu would take turns as leader.

It follows a year of political deadlock in which a jaded Israeli electorate had voted in three inconclusive elections, with no appetite for a fourth.

Even more urgently, it faces the coronavirus pandemic that with more than 2,600 confirmed cases, 8 people dead and much of the country under partial lockdown, has hit the economy hard.

“These are not normal days and they call for special decisions. Therefore, as I’ve said, I intend to examine and advance, in any possible way, the creation of a national emergency government,” Gantz told parliament, accepting the speaker’s gavel.

His short speech followed a somber scene underlying the gravity of the health crisis in which parliamentarians walked into the Knesset’s near-empty main chamber one by one to vote, to maintain social distancing.

After the March 2 election, Gantz was asked by Israel’s President Reuven Rivlin to try and form a government. The widely respected Rivlin had already pressed both Gantz and Netanyahu to join forces, with the country facing a possible national lockdown to try and stop the coronavirus spread.

But without enough support on the center and left to form a coalition, Gantz’s chances were slim to none.

This repeated the pattern of two elections in 2019, with neither Netanyahu nor Gantz able to form a government, so coalition talks were soon underway even though both men had excoriated each other during the election campaigns.

Netanyahu proposed a “national emergency” government to tackle the coronavirus, promising to step down as prime minister within an agreed period. Some Israeli media reports said Gantz would take over by September 2021, but this was not confirmed by either side.

During the election campaign Gantz had ruled out serving with Netanyahu, citing the prime minister’s looming trial on charges of bribery, fraud and breach of trust, which he denies.

But Likud had threatened to abandon unity efforts if Blue and White went ahead with their original candidate for speaker, who opposed any deal with Netanyahu.

“Why did Gantz give up? It’s very simple. Gantz is tired. And so would you be after 14 months of being relentlessly smeared and outmaneuvered by Netanyahu,” Anshel Pfeffer, a political analyst for Israel’s Haaretz newspaper, wrote on Twitter.

“And now most of the Israeli public wants a unity government during the Coronavirus crisis. Very simple.”

At least one member of Netanyahu’s right-wing bloc, Defense Minister Naftali Bennett, publicly congratulated both Netanyahu and Gantz on a unity agreement, but there was no formal announcement that a deal had been reached.

Gantz, a former head of the Israeli military, is a political newcomer. He has portrayed himself as a straight-shooter who will restore simple values to Israel. But what he would do in power is not entirely clear, as he has sent mixed messages.

He casts himself as more diplomatically accommodating than Netanyahu, urging redoubled efforts to restart peace talks. But he has also embraced U.S. President Donald Trump’s Middle East plan, which was rejected outright by the Palestinians for what they see as pro-Israel bias.