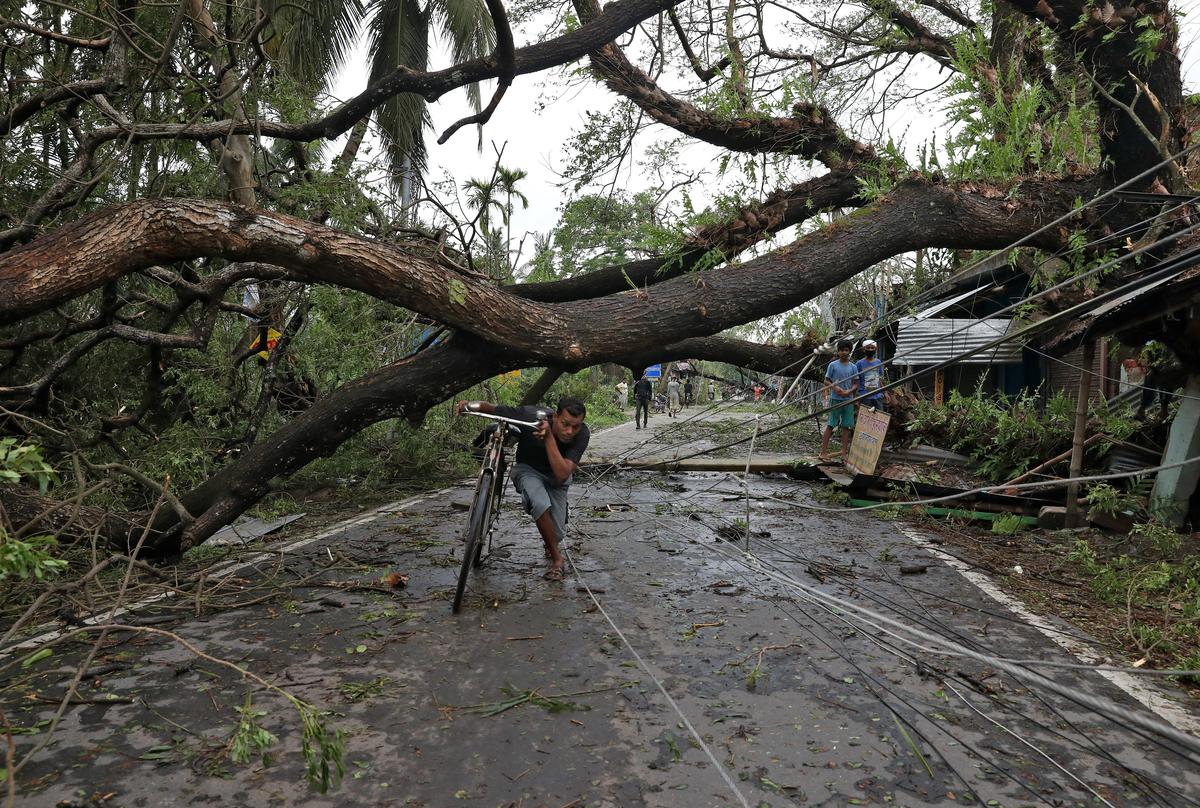 KOLKATA/DHAKA (Reuters) – A powerful cyclone that tore through India’s eastern state of West Bengal this week has caused a damage of 1 trillion rupees ($13 billion) to infrastructure and crops, state officials said.

A man walks with his bicycle under an uprooted tree after Cyclone Amphan made its landfall, in South 24 Parganas district, in the eastern state of West Bengal, India, May 21, 2020. REUTERS/Rupak De Chowdhuri

Neighbouring Bangladesh, which also fell in Cyclone Amphan’s path on Wednesday, initially said it had suffered a loss of 11 billion taka ($130 million). But this could rise, government officials said.

The two countries have lost at least 102 people in the cyclone, the most powerful in over a decade, mostly because of house collapses and electrocution. More than 3 million people were evacuated before Amphan made landfall, preventing a large number of deaths.

The cyclone has affected more than 13 million people – some losing houses, crops and lands – and over 1.5 million houses have been damaged, two West Bengal government officials told Reuters.

In North 24 Parganas, a district in southern West Bengal, 700 villages were flooded and 80,000 people lost their homes, the Times of India newspaper reported.

Hundreds of thousands are in relief camps across the state, the officials said, amid concern that lax social distancing norms could fuel a spread of coronavirus cases.

In Kolkata, the state capital, authorities struggled to remove debris from roads and clear trees that fell as the cyclone, packing winds of 133 km (83 miles) per hour, pounded the city of 14 million for hours.

“Communities need urgent support as they are without basic necessities such as food, clean water and materials to rebuild their homes,” Farah Kabir, the country director of ActionAid Bangladesh said.

Reporting by Subrata Nagchoudhary in Kolkata and Ruma Paul in Dhaka; Writing by Sankalp Phartiyal; Editing by Sanjeev Miglani and William Mallard

IOC chief Bach says Games would be cancelled if not held in 2021
Wall Street opens flat on simmering U.S.-China tensions
Canada ‘concerned’ about the situation in Hong Kong, calls for dialogue: PM Trudeau
Most publicly listed companies keep U.S. small-business aid loans
Thousands without power in Western Australia after once in a decade storm