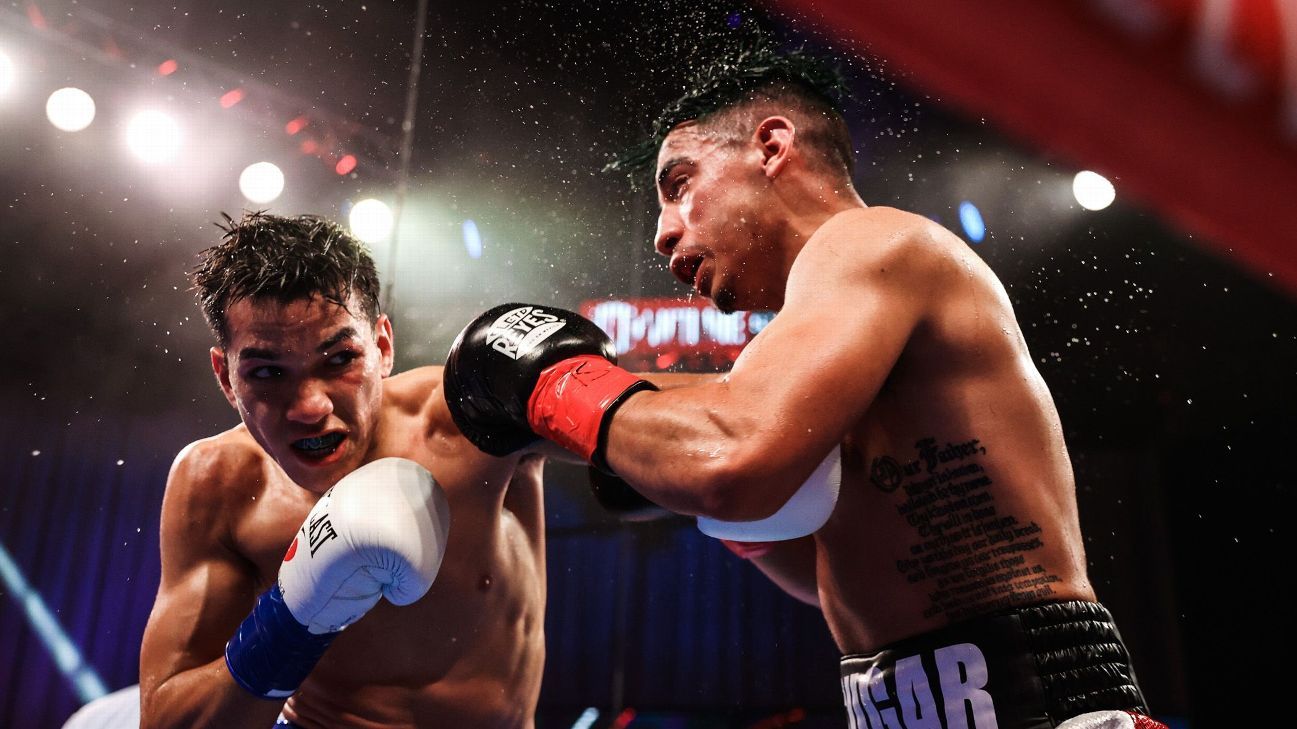 Brandon Figueroa successfully defended his WBA “regular” junior featherweight title by stopping Damien Vazquez in the 10th round of a fight scheduled for 12 in the first part of a Showtime PPV card Saturday night at the Mohegan Sun Arena in Uncasville, Connecticut. Though Vazquez had success early on throwing quick combinations from his southpaw stance, the strength and power of Figueroa allowed him to take over the fight as the rounds progressed.

Vazquez (15-2-1, 8 KOs) was able to beat Figueroa to the punch in the first round. Though he doesn’t possess the power of Figueroa, he was able to land some good punches. After having some issues with Vazquez in the first, Figueroa (21-0-1, 16 KOs) decided to go southpaw himself in Round 2. As the two began to exchange, Figueroa was doing more damage.

“I felt good tonight. He was a lot tougher than I expected,” Figueroa said. “I was punishing him to the body and head. I had to switch to lefty because of how he was coming in with his head. I didn’t want to risk a head butt so I boxed him differently. He was taking a lot of punishment and just trying to jab and survive in the last few rounds. I have to give him credit for being tough. He came to fight and proved he deserves to be in the ring with me. I knew with the pressure I put on, he wasn’t going to last 12 rounds.”

As the fight went on, Figueroa was punching Vazquez at will. Vazquez had his moments, but he was getting hurt more often as swelling increased around his right eye. Before the eighth and 10th rounds, the ringside doctor checked on Vazquez.

Finally, a steady barrage of blows from Figueroa forced the stoppage at 1:18 of the 10th, as referee Gary Rosato waved it off.

“My dad told me to put more pressure in the middle of the fight and that’s what I did,” Figueroa said. “He was holding up and taking my punches. But I knew just a little bit more damage and I could end it.”

“This shows that I can fight under pressure, I’m strong and I give exciting fights,” Figueroa said. “That’s what fans want to see. I always leave everything in the ring and that’s what I did tonight.

“I’m ready for anyone, I know I belong with the best fighters in the division. I just want to give fans great fights.”

WBO bantamweight titlist John Riel Casimero overpowered Duke Micah on his way to a dominant third-round TKO victory. Though Micah did everything he could to avoid Casimero’s punches, he simply could not handle the offensive arsenal of the defending champion.

From the start of the fight, Casimero (30-4, 21 KOs) came out swinging with a wide variety of punches, including overhand right hands and wild left hooks, and everything was thrown with full force. Micah (24-1, 19 KOs) was more than willing to meet him in the center of the ring and exchange with Casimero, often to his own detriment.

But in the second round, Casimero struck Micah with a left hook to the temple that shook Micah and and sent him stumbling backward to the canvas. Micah was able to continue, but he was still groggy and on the edge of getting stopped as he got punished for two full minutes by the oncoming punches of Casimero.

Micah somehow survived the round, but before the third he was checked by the ringside physician as a precaution. Though Micah was cleared to continue, it was all for naught as a left uppercut badly stunned him early in the third and the fight was waved off by referee Steve Willis just 54 seconds into Round 3.

“I worked hard and got the win tonight,” Casimero said afterward. “In the first round, I saw the body shot hurt him and thought I could get him out right away, but he’s a good boxer who was undefeated for a reason. The second round the uppercut hurt him, but Duke Micah works hard, he’s strong and has a good chin. I knew I was facing a good fighter, so I didn’t expect to knock him out so fast. He’s strong so I was prepared to go all 12 rounds.

“I’m the real monster. Naoya Inoue is scared of me. You’re next. I would have knocked out anyone today. If Inoue doesn’t fight me, then I’ll fight Guillermo Rigondeaux, Luis Nery, or any of the top fighters.”