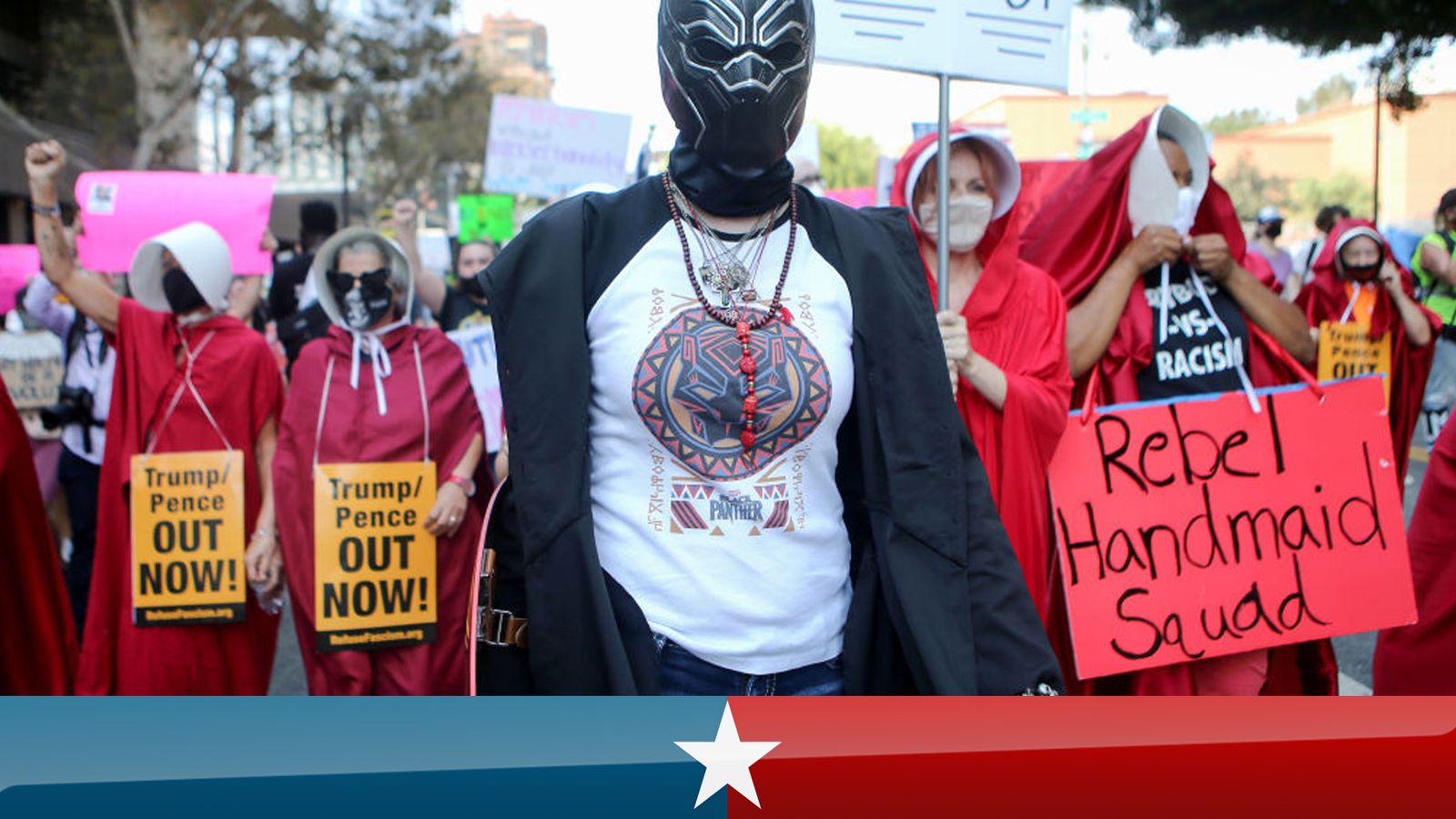 In Washington DC we witnessed a wave of opposition – a women’s march with a message for the president.

“He should stand down, he should watch his back ‘cos everybody’s coming for him,” Tiffany Jones said.

She and her 20-year-old daughter had driven to the capital to join thousands of others calling on people to vote Donald Trump out the White House.

“My rights have been more violated in the last four years than they have in my lifetime and I don’t want to see that continue for another four years. That would be horrible for women in this country,” Tina Atwell told me as she handed out posters and masks declaring “count on us to fight” and “count on us to win”.

The protest brought together people from different groups, including Black Lives Matter demonstrators, pro-choice campaigners and those fighting for women’s rights.

“This is what democracy looks like,” they chanted and “Donald Trump get out” as they marched past his hotel.

The resentment isn’t new – a day after President Trump’s inauguration in 2017 millions gathered across the US to voice their anger.

For them, four more years isn’t an option.

“We are going to vote to support an administration that we can hold accountable, that will listen to us and that will actually listen to the agenda of the American people,” said Tabitha St Bernard-Jacobs, deputy director of the Women’s March.

Polls show Joe Biden is still leading in the presidential race and suburban women could be a major obstacle to Mr Trump’s return to the White House.

In Pennsylvania this week, the president tried to get them on side.

“Suburban women, would you please like me?” he said to delighted supporters, “Please. I saved your damn neighbourhood, ok?”

But protesters aren’t convinced. Among their concerns is Donald Trump’s nomination of Amy Coney Barrett to the Supreme Court, which has left many fearing abortion rights are under threat.

As protesters marched past the court steps, a small group of pro-life campaigners held placards supporting the president’s pick, prompting angry exchanges as both sides faced off.

“He’s the most pro-life president we have ever had so I am in support of him and I am a supporter of his policies,” said Mallory Finch.

With just over a fortnight to go until the election, time for action is running out for both sides.

They know it is votes not loud voices which will decide America’s future.

During lockdown, there has been a worrying rise in the number of referrals to child protection units
Transfer Talk: Mbappe not bothered by Zidane’s rocky Real Madrid future
Three English Bulldog puppies stolen after substance sprayed in woman’s face
Judge cleared of looking at phone during fight
Tiger ‘a lot more crisp’ with 66, but still 12 back