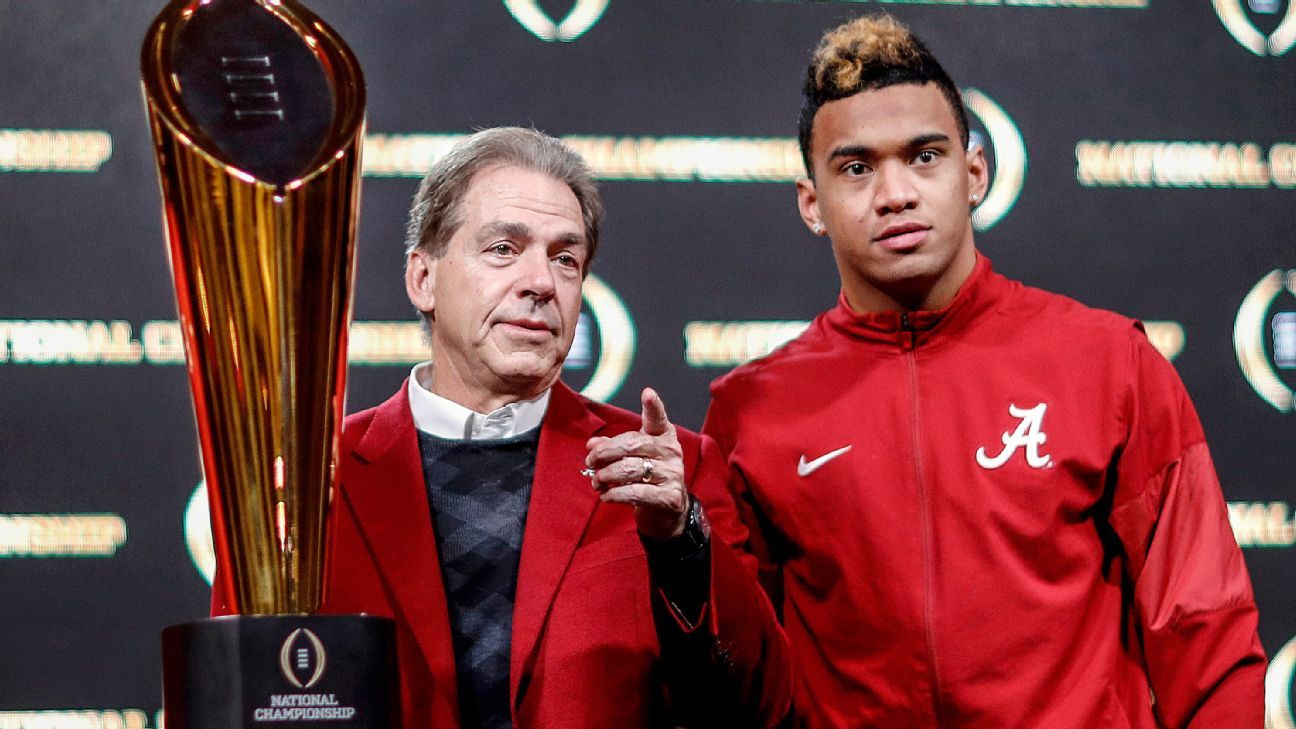 When you have coached as long as Nick Saban (this was his 25th season as a head coach), won as many games (256), national championships (7) and conference titles (10) and pumped as many dudes into the NFL draft (33 first-rounders and counting), then guess what? You get your own all-star team!

Since Saban won his record seventh national title on Monday night, we have been poring over stats, scrolling through film and pestering sports information directors to determine the greatest college football player at each position to have spent time playing for and being yelled at by St. Nicholas, patron saint of angrily swollen forehead blood vessels. The smorgasbord of candidates for this team is so ridiculously talented that the list of those who didn’t make the cut might still be better than any other coach’s first-team roster.

So, who made it in? Read ahead, as we present our ESPN.com All-Saban team. Honorees will be awarded a trophy shaped like a straw sun hat, turned upside down and filled with Little Debbie Oatmeal Creme Pies.

QB – Tua Tagovailoa
Arguably the most thrilling player of the past 25 years who didn’t win the Heisman Trophy, the now-Miami Dolphin is a one-name superstar, like Madonna, Beyonce and Macklemore. Those who closely follow recruiting and the Crimson Tide have known of the kid since he was a high school junior in Honolulu. The rest of the world met him when he came off the bench to throw perhaps the greatest pass in college football postseason history, an OT dagger against Georgia in the 2017 College Football Playoff Championship. And who’d he toss that pigskin to?

WR – DeVonta Smith, Julio Jones, Amari Cooper
He threw it to another freshman, Smith, who as we all now know went on to become the 2020 Heisman Trophy winner. If you’re looking for the position that most accurately illustrates the genius of Saban, it’s this group right here. The coach who used to passionately argue for rules that would bog down pass-happy spread offenses is now the CEO of Wideout Incorporated. Just look at the receivers who didn’t make our top three, a list that includes Calvin Ridley, Jerry Jeudy and Henry Ruggs III from Alabama, not to mention Josh Reed and Michael Clayton from LSU and even Plaxico Burress, Derrick Mason and Muhsin Muhammad from Saban’s stint at Michigan State from 1995-99. Hey, we told you these roster cuts would be wicked.

RB – Derrick Henry
Speaking of wicked cuts, our one-back set has another Heisman winner set up in the backfield. Henry won the stiff-armed man in 2015 and he edges out the 2009 winner, Mark Ingram II. Why? Have you ever seen the two of them standing side-by-side? It’s like Ant-Man before and after he hits the “become giant” button.

TE – O.J. Howard
Howard doesn’t have gaudy stats, at least not in the regular season, but his back-to-back national championship performances against Clemson in 2016 and ’17 (314 yards, 3 TDs) still give the folks in upstate South Carolina the heebie-jeebies.

OT – Andre Smith, Alex Leatherwood
OG – Chance Warmack, Barrett Jones
C – Ryan Kelly
The NFL trenches are like an Alabama Big & Tall Clothing Warehouse, with seemingly every pro roster including a former Saban O-lineman. But this quintet of man-mountains spans the entire 14-year Saban Era in Tuscaloosa, beginning with Smith, anchor of the 2007-08 teams all the way to Leatherwood, who covered the blindside for this year’s record-breaking offense. Between them this group owns three Outland Trophies, four Jacobs Blocking Trophies and all were first-team All-Americans. Heck, Jones was a two-time All-American and did it playing two different positions! Also, if our All-Saban team bus ever ended up in a ditch or snow embankment, these five could pull it out with their bare hands.

D-Line – Jonathan Allen, Quinnen Williams, Marcus Spears
Allen would have made this list if he had made only one play in his career, that being the airborne “Superman” sack of Texas A&M‘s Trevor Knight in 2016. It was so amazing that at that year’s College Football Awards, I saw Knight ask Allen to sign a picture of it. It was merely one of his 28.5 career sacks, second only to Derrick Thomas on Alabama’s all-time list. Allen’s understudy was “Q” and Williams, like Allen, went on to win an armload of awards and wrap up an armload of QBs. Meanwhile, the lone LSU player on our All-Saban squad is Spears, the QB-smashing captain of Saban’s first national title team in ’03. Also, I work with Spears and he knows where I live, so I thought it best that I don’t leave him off this list.

LB – C.J. Mosley, Dont’a Hightower, Rolando McClain, Reuben Foster
In case you were wondering why we went with a three-man defensive front, it was to free up space for all of the linebackers. This position room is more crowded than Saban’s ring drawer. Mosley had 319 tackles over four seasons, the best for a Bama LB since the mid-1980s. Over his four years, Hightower had 21 tackles for loss and was a two-time team captain. McClain had 14.5 tackles for loss in one season and was a two-time member of the dean’s list. And Foster … well, just ask Leonard Fournette about Reuben Foster. On Nov. 7, 2015, Foster had 11 tackles, limiting the LSU running back to 35 yards and essentially ending his Heisman campaign.

CB – Minkah Fitzpatrick, Dre Kirkpatrick
Now we come to the poor souls in the All-Saban defensive backfield. No one catches more heat or hell than these dudes. They had to face off against all those future NFL receivers in practice every single day, all while under the burning-the-ants magnifying glass of Saban, who not only played DB at Kent State back in the day, he was a DB position coach for a dozen years — from West Virginia to the Houston Oilers. But that’s also why the Patricks — Fitz and Kirk — will always hold a special place in Saban’s heart. Kirkpatrick’s crown jewel will always be his nine pass breakups against LSU in the 2011 BCS National Championship Game. Fitzpatrick’s stated goal was to lead the NCAA in interceptions, but he didn’t. Why? Because he had so many pick-sixes (four, an Alabama career record) opponents stopped throwing to his side almost completely.

S – Mark Barron, Landon Collins
Both of these guys were pushed into leadership roles ahead of schedule when the All-Americans who preceded them departed for the NFL. Both guys answered the bell by becoming All-Americans, not to mention team captains and national champions. Just like the coach for whom our team is named, these two are tough, smart, dominating and, yeah, a little scary.

PK – Paul Edinger
Finally, a Spartan makes the list! During his five years at Michigan State, Saban coached a handful of All-Americans, but his first big-time kicker was Edinger, who booted a then-MSU record 22 field goals in 1998.

P – JK Scott
Right smack in the middle of Saban’s first season in East Lansing, a baby with a big right foot was born 1,200 miles away in Denver. His name was JK Scott, and 20 years later, he was an integral part of two national championship teams in Tuscaloosa as a two-time All-SEC, one-time All-American and now all-time All-Saban punter.

KR – Javier Arenas
Both of those big shoes are thankful they never had to kick it away to the final member of our All-Saban team. In fairness, Arenas was recruited by Mike Shula, but it was under Saban that he became a kick-return legend, setting an SEC record for punt return TDs (7) and finishing only 9 yards shy of the NCAA mark for career punt return yards (damn that Wes Welker!). He is still the only player in college football history to rack up 2,000-plus kickoff return yards and 1,500-plus yards on punt returns. Also, he had 154 tackles, six INTs and seven sacks to be named an All-American at cornerback, so yeah, we managed to sneak another awesome defensive back onto our All-Saban team through a loophole. Sneaky smart, right? Just like Saban himself. Just call it part of our Process.