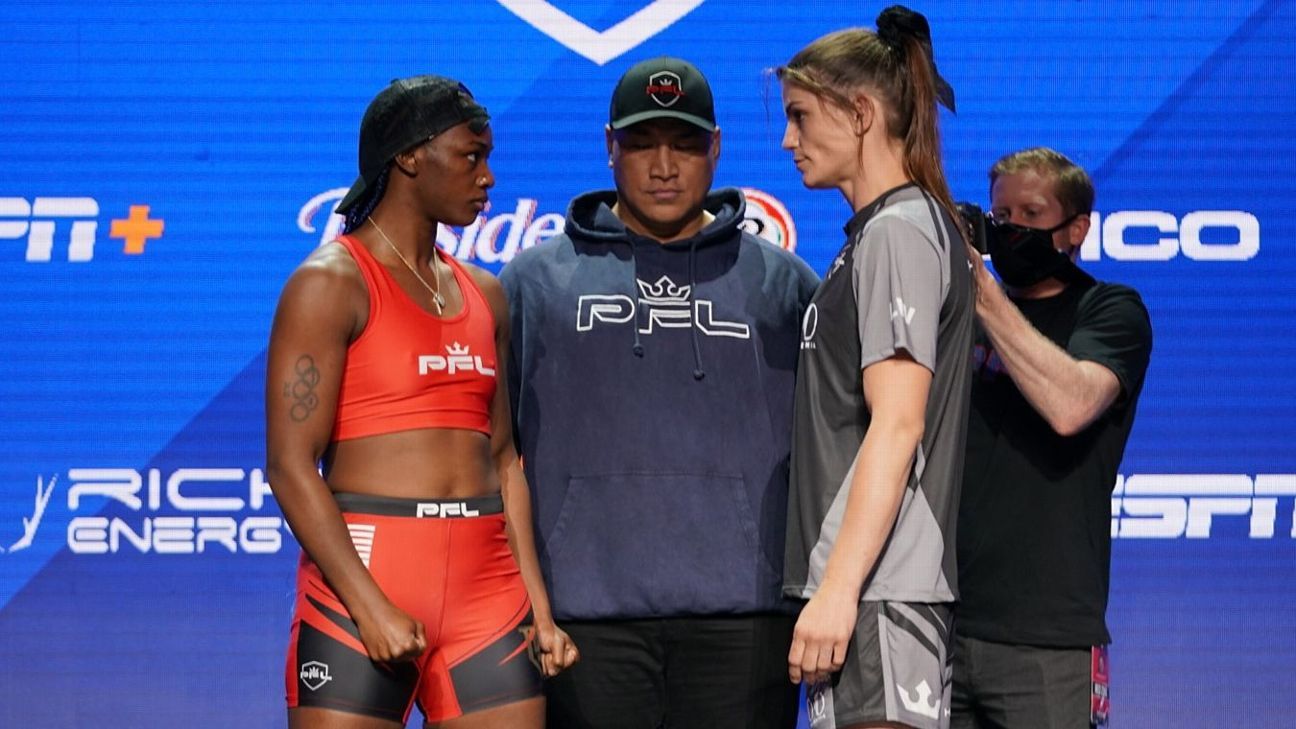 The main event will transform one of the most decorated champions in sports into a fresh-faced neophyte.

But Shields’ lightweight bout against Brittney Elkin is essentially a bonus draw on a night when the PFL’s featherweights and men’s lightweights try to secure spots in the playoffs. Four fighters in each division will qualify and get to continue on a journey that will culminate on New Year’s Eve with champions crowned in six divisions, each winning $1 million prizes.

Follow along throughout the night as Jeff Wagenheim breaks down the action, fight by fight.

All of a sudden, Moraes had urgency.

He had started the fight with a gift of 3 points after Stirn missed weight, and for much of the first two rounds of the fight, the 30-year-old Brazilian looked like he was willing to settle for that. Stirn took him down midway through the first round, and Moraes didn’t do much to try to get off his back. When Moraes dropped Stirn early in Round 2, he didn’t swarm to finish a compromised opponent and instead backed up to continue the standup fight.

This seemed like a curious approach for a fighter who had lost his season opener and needed every point he could get in his push to make the playoffs.

Then, suddenly, Moraes had 5 points. Taken down in the final seconds of the second round, he used a kimura to reverse position, flipped himself on top of Sitrn and then cranked the arm harder. Stirn tapped — at 4:59.

“See you guys in the semifinals,” Moraes (12-5) said after his first career submission. “Believe. You have to believe.”

Moraes’ playoff status was still to be determined, but at least Moraes went for it with gusto.

What great timing by Wade, who got his first knockout in a 25-fight career that goes back a decade.

He had just seemingly recovered after being hurt by a flurry of Ospanov punches midway through the second round. Wade, who had been moving forward the whole fight, backed up Ospanov against the cage and threw what looked to be intended to land as a body kick. But Ospanov leaned forward at the same time, and the kick connected to the head, wobbling the fighter from Kazakhstan and leading to a knockout at 2:18 into the round.

The 5 points for the second-round finish sewed up a playoff spot for Wade (19-6), who came into the bout with 3 points following a decision win earlier in the season.

But the 33-year-old from Islip, New York, was most excited for his first knockout.

“Oh, my god, the monkey I just got off my back, you don’t know,” Wade said. “I’ve been waiting for that my whole career.”

The 31-year-old Ospanov (11-4), was making his PFL debut, and will not make the featherweight playoffs.