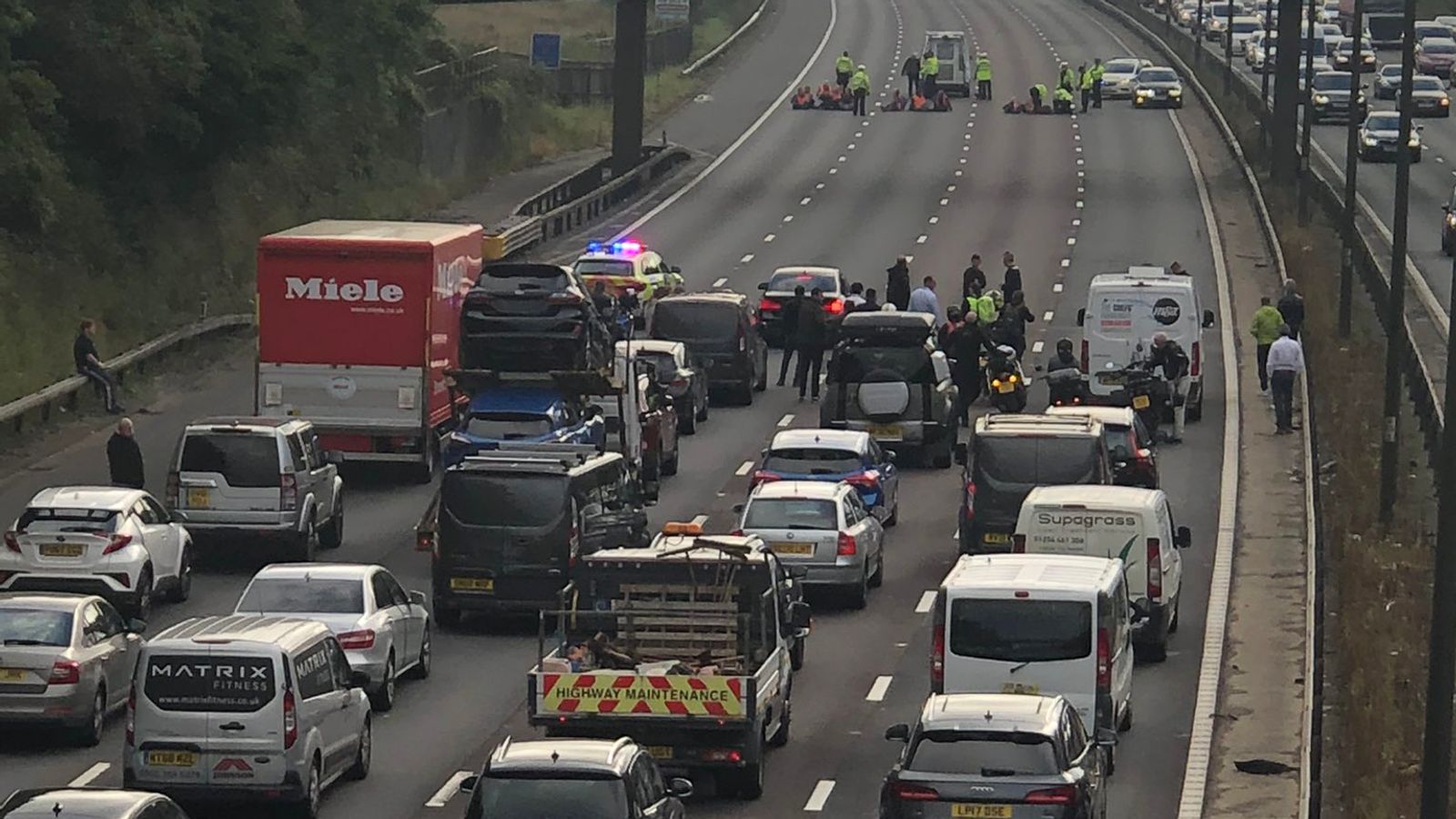 Parts of the M25 has been blocked off by climate change protesters for the second time in three days.

Protesters from Insulate Britain, which included an 82-year-old man, brought traffic to a halt at several sections of Britain’s busiest motorway on Wednesday morning.

The group is demanding government action on home insulation, tweeting: “#InsulateBritain are back. @BorisJohnson can you hear us yet?”

The demonstrators targeted Junction 23 for South Mimms in Hertfordshire, as well as the main carriageway from Junction 8 at Reigate to Junction 9 at Leatherhead, both in Surrey.

Local news media reported that Princes Road in Dartford, Kent, is partially blocked with queuing traffic due to a demonstration on the roundabout at Junction 1B of the motorway, causing congestion on the approach to the busy Dartford Crossing.

Surrey Police said it had arrested 15 people after attending Junction 8 and 10 of the M25 overseeing a protest which was reported at around 8am.

“A number of protesters from Insulate Britain and Extinction Rebellion are at the two locations and appropriate diversions are being set up with the help of partner agencies. We have currently made 15 arrests,” the force said.

UPDATE: We have now arrested 15 people in connection with this incident.
❗ We are currently in attendance at Junction 8 and 10 of the M25 overseeing a protest which was reported just after 8am today (15 September).

It advised motorists to avoid the area if possible.

One Twitter user, Phillip Marvel, said the protesters were “at it again” adding: “Children stuck on school buses, ambulances can’t get through. This is not helping their cause.”

Insulate Britain said 89 of its members took part in the action on Wednesday, adding in a statement: “We demand credible action now.

“Proper jobs for hundreds of thousands of people to start the first real step – to insulate all the homes of this country – which pound for pound gives us the biggest reduction in carbon emissions.

“It is a total no-brainer and yet this government refuses to get on with the job. This is criminal negligence.”

The group tweeted that one of Wednesday’s activists included an 82-year-old man “with a severe heart condition”.

On Monday, the group blocked off five junctions of the M25 with another demonstration, resulting in tens of thousands of drivers being stuck in huge queues of traffic and some 78 people arrested.

Motorists told to ‘carry on as normal’ when buying fuel after BP shuts some petrol stations
Johnny Depp says ‘no one is safe’ from cancel culture as he accepts major film award
Platinum Jubilee medal design revealed ahead of Queen’s 70-year reign celebrations
Fifteen-year-old World Superbike star dies after crash during race in Spain
ONE domination a family affair, but Lee siblings focused on their own journeys